For Young Carers Day, Kiera from the National Lottery funded Ocean Youth Trust Scotland tells us what its like to be a carer.

My name is Keira and I’m 15 years old. I became a Young Carer almost 5 years ago when my little sister was born, she was born in June 2015 weighing 3lb 8oz. She was 8 weeks and 4 days early and had 2 types of renal kidney failure and underdeveloped lungs. The first picture we got of her we could hardly see her, she was covered in wires, tubes and tape but she's a fighter and always has been. After 93 days in Neonatal Intensive Care and the Special Care Baby unit she was allowed to come home. At first I had no idea I was a Young Carer, I just thought this is what happens when you have someone in your family that is unwell, until there was an assembly in my school describing what it's like to be a young carer and then I thought "Hey, this kind of sounds like me". A few months passed and mum spoke to my sisters and I about possibly joining the Helensburgh and Lomond Young Carers, at first I was hesitant, I struggled at school with friends and I didn't want to join another group where I would be alone, but I joined and after meeting a few of the staff I was made to feel incredibly welcome and since then I know that joining was one of the best things I've ever done.

I don't really think that my job as a young carer is that different to just being a big sister. Sure, when Tiana's not well there's a lot more to do, my usual plan for the day is just try and help as much as I can, usually since my mum and dad have a lot on their plate with Tiana and work and making sure the house doesn't fall in on itself I just skim a little off the top of the 100ft high pile of jobs and things they have to do, like bath my sisters or help them clean their room or give Tiana her medicines. Sometimes it's difficult, especially when she's in hospital, everyone needs to step up and take on a few extra roles which can be overwhelming sometimes but it just puts everything in perspective since my parents do this every day without fail. On an emotional side it's more difficult, I already have 5 sisters so finding time to speak to my mum if something's on my mind is hard enough without the added factor of everything Tiana needs, it took me 4 months to pluck up the courage to tell her I was having issues in school because I was worried I was wasting her time, which I now know is ridiculous.

The OYT sail was one of the best experiences of my life, the only other boat I had been on was a ferry for 30mins so I was nervous to say the least. I'm still relatively new to the Young Carers group so there were a lot of people I hadn't met before, but within a few hours it felt like I had known them my entire life. It’s hard to describe what an experience the sail was as at times it was so hard, I was tired, grumpy and even seasick. But other times I was having the time of my life, sailing the boat, being out in the fresh air and rain and having such a laugh with everyone on board. Being friends with other young carers is so much easier than being friends with other people my age, they don't understand what it's like to have to go through these things, sometimes it's nice to have a break from your caring role but each young carer I have met, has turned into a great friendship because no matter what you're going through, you can bet they've gone through it too, before I joined the Young Carers, I was worried what people were going to think of me and tried to avoid speaking about it as much as possible, but now I'm so proud to be a young carer, it's a part of who I am. I would recommend anyone to go on the OYT sail if they get the chance as it’s something I will remember for the rest of my life.

I think the one piece of advice I would give a new young carer is no matter what happens there are people there for you, to pick you back up when things are tough, and most of these people you will find in a your local young carers service. You just have to believe that you can make the first move to meet new people, because if you can be a young carer, then you can do anything. 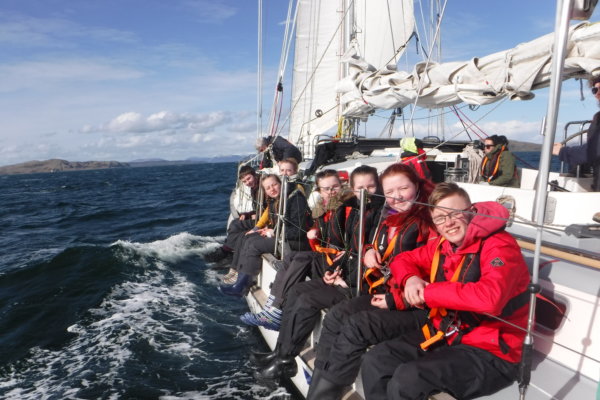