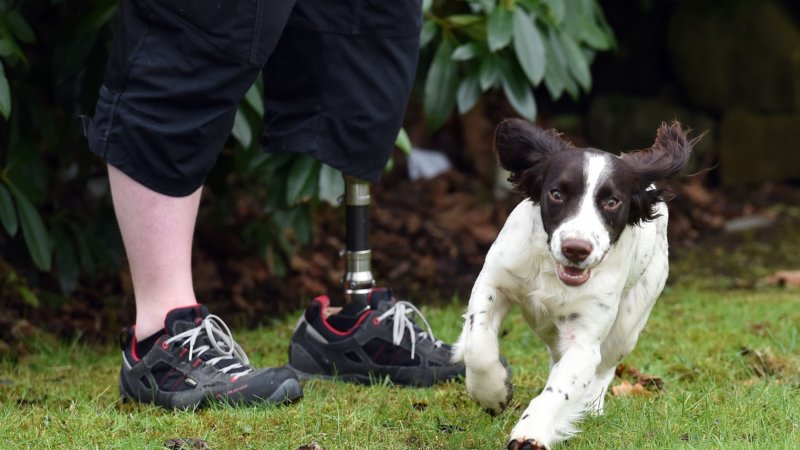 Most veterans leave the Armed Forces and adapt well to civilian life, but some face real difficulties, in particular, those with post-traumatic stress disorder.

Bravehound was launched in 2016 to match dogs with veterans, helping them return to civilian life.

The project's first Bravehound, Irma, has brought joy back into veteran Paul Wilkie's life. Tormented by recurrent nightmares, Paul is now woken by his trusty spaniel, licking his face.

"She just takes it all away, I haven’t stopped smiling since I got her.

Mick McConnell's life was changed forever when he stepped on an Improvised Explosive Device in Afghanistan. Mick's injuries led to the amputation of his leg and ended his military career. Mick’s sniffer dog Memphis was with him when he was injured and Mick was determined to be reunited with him as soon as Memphis could be retired. Memphis was instrumental in leading Mick through some dark days during his recovery. Memphis sadly developed cancer and died in February 2017 leaving Mick devastated. This is when Bravehound came to the rescue with Sasha, a beautiful Sprocker Spaniel.

Now Mick and Sasha are inseparable. Mick said "You will never know how much that wee whirlwind means to us! She is getting me out again and makes me laugh all the time."

Another veteran with a Bravehound has made three attempts to take his own life. Now he has a dog: "I wouldn't be here without my dog, I’d never leave him."

Inspired by Bravehound? Apply for funding to support your own community. Search for funding