How Polli:Nation got a school buzzing

When Olivia began Year 3 at St Alban’s Church of England Primary School in Havant she was a timid girl with no interest in nature. But since becoming involved in Polli:Nation – a National Lottery-funded scheme that involved 260 schools across the UK by improving the habitat for bees and other pollinating insects – she has developed a passion for the environment and found her voice.

“When I came here I developed this absolute love for everything outdoors,” says the 11-year-old. “I started to speak up more and I spoke about my love for pollinators. It’s given me a real confidence boost.”

The impact of Polli:Nation on Olivia, her friends Ava and Catie, and the rest of the 220 pupils at the Hampshire school has been profound. Many of the students are able to identify multiple species of bees and insects and the plants that attract them. During lunch breaks they take turns filling watering cans and wandering among beds filled with lavender, Cornflowers and other pollinator-friendly flora such as thistles, Cosmos and Borage.

“When we started the project I didn’t really know one bee from another,” says 11-year-old Catie. “Now I know a lot about the different species.”

She also has a clear, concise explanation as to why pollinators need to be protected and encouraged. “They pollinate all our plants and most of the food that we eat has been pollinated by a bee or another pollinator. One in three of our mouthfuls is pollinated food so we have to make sure the pollinators are here so we can eat healthy food.”

The three-year Polli:Nation project was administered by Learning through Landscapes (LtL), a UK leading charity dedicated to outdoor learning and play. It identified 260 primary, secondary and special education schools across the UK who had a vision for creating pollinator-friendly spaces.

Armed with a £1.3m grant from the National Lottery Heritage Fund, LTL recruited and trained a team of facilitators who visited the schools to provide expert advice about creating pollinator-friendly spaces. It also gave each school about £800 to create appropriate habitats and make other improvements.

The scheme had several stages, says Polli:Nation Projects Manager, Mary Jackson. The first step saw schools learning to identify the many kinds of pollinators and assessing how many of them were visiting their grounds. The resulting information was collated by The Open Air Laboratories (OPAL) network, a UK-wide citizen science initiative.

Once each school had a clear idea of its pollinator population, the students set about improving habitat by planting pollinator-friendly flora and other initiatives. “New meadows have been grown, bug hotels built, flowers and trees planted,” says Mary. “Pupils have spread the message on local radio whilst others have linked up with beekeepers.”

In Cornwall, several schools set about helping the Longhorn bee whose population has declined from 24 to just eight sites. In Northern Ireland, rare orchids began blooming after a school stopped mowing a part of its grounds. And in North East England several schools have started keeping bees.

At St Alban’s, the transformation has also been profound. New flower beds have sprung up across the grounds and students take turns watering them during breaks. A purpose-built habitat for solitary bees – more than 90 per cent of the 267 species of bees are not social and do not live in colonies – has attracted plenty of residents and the quest to identify new pollinators has become a popular pastime.

“The whole school has changed,” says Catie. “It was always nice, but now it’s more colourful and you see and smell more things. Everywhere you go there’s a flower bed – it has spread all over the school.”

Julie Newman, the St Alban’s teacher who led the Polli:Nation project, says her students quickly embraced it. “When you’re between 4 and 11 years old it can be easy to feel you’re not able to make a contribution. “The press is full of stories about the poor state of nature and pollinators, but they felt Polli:Nation was a way to be empowered and make a positive difference.”

Although Polli:Nation has officially ended, its legacy is strong. Particularly at St Albans, where the pupils came up with The Pollinator Promise as a way of continuing and extending their mission.

About 525 individuals and companies have so far pledged to plant a pot or put aside a 1 x 1 metre area in their garden, school grounds or business to grow pollinator-friendly plants. The signatures obtained by St Albans pupils include those of their local MP, the Havant branch of the pharmaceutical giant Pfizer and people in the United States and Brazil.

Mary says there is hard evidence that the work done by the schools that took part in Polli:Nation had a beneficial effect on the number of pollinators. A survey revealed that “significantly more” pollinating insects were found after habitat improvements were made – an average of 7.7 insects per 1 metre quadrant compared with 4.3 before.

The insects weren’t the only beneficiaries, of course. A total of 35,721 pupils and 2185 adults had taken part in the scheme. Participants who were actively involved demonstrated a strong understanding of the role of pollinators in food growth and biodiversity and many – like Olivia – found a new confidence as a result.

“It was a very special project to be part of,” says Julie. “What fascinates me is that the children don’t stop. They’re still asking ‘what do we need to do next?. Only last week one of them noticed that we don’t have many beetles. An enthusiasm for one thing quickly leads to another.” 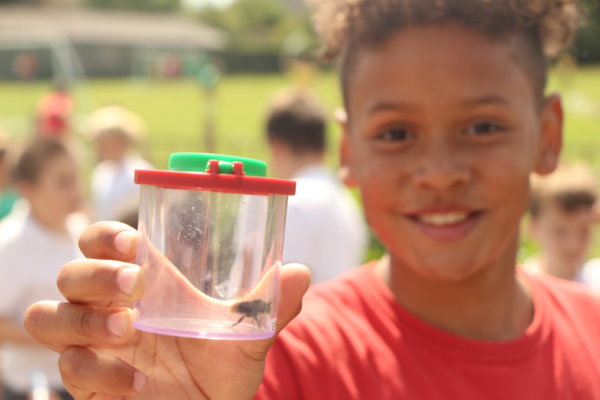 Polli:Nation is a three-year biodiversity project, educating 28,000 children and their teachers in the UK about the range and role of pollinating insects and how to help them.