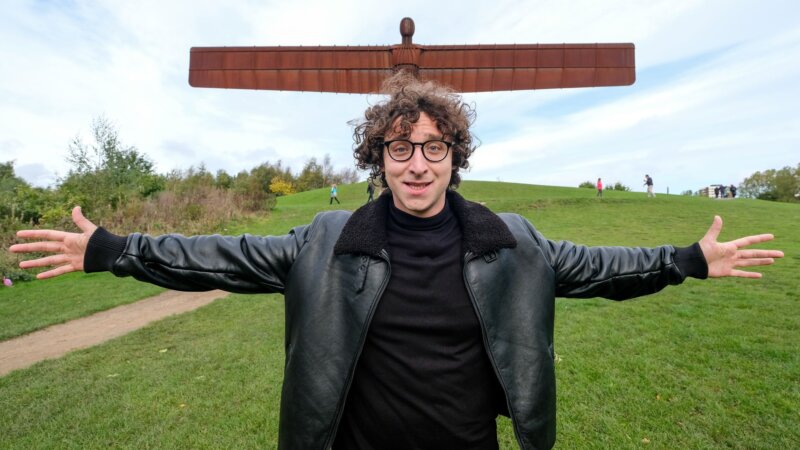 Antony Gormley’s Angel of the North is one of the UK’s most famous pieces of public modern art, seen by 90,000 people every day. The artwork was erected on 15th February 1998 and over 70% of the total cost - £584,000 – came from National Lottery funding. In the video released today, Julius Dein shocks locals by making the iconic statue disappear, highlighting how different the landscape of the UK would look without the National Lottery.

Built to withstand winds of over 100mph and weighing an incredible 100 tonnes, Antony Gormley’s Angel of the North gives the appearance of being immovable as it looks out over Gateshead and the North East. In the video released today, Julius Dein works his trickery to suddenly leave the landscape bare of Gormley’s masterpiece, to the shock of locals who witnessed the illusion live, and his 6 million Instagram followers.

The vanishing structure illustrates what the UK’s art landscape would look like without the iconic art the National Lottery has funded in the UK including The Angel of the North, The Kelpies, The Tate Modern, Kew Gardens, National Gallery, Natural History Museum, National Portrait Gallery, Southbank Centre and the British Museum.

Dein worked with The National Lottery on the stunt to raise awareness of the impact funding has had on art across the UK and to highlight what life would be like without it – from the most iconic pieces we know and love to community art projects which touch our lives every day.

“I am absolutely delighted to be working with The National Lottery for their 25th birthday in raising awareness for all the iconic and community art projects they have supported and funded over the last 25 years. Antony Gormley’s The Angel of the North is iconic and is the ephemeral symbol of the north which celebrates the roots of the people that live here. I have created this illusion with The National Lottery to raise awareness of how bare the UK’s art landscape would be without this funding, and we shouldn’t take that for granted.”

“Over the past 25 years National Lottery funds have helped us transform the arts and cultural offer in England: investing in new buildings like Nottingham Contemporary and The Lowry in Salford, supporting artists and smaller organisations through National Lottery Project Grants, and developing programmes like Creative People and Places, targeting areas where people have traditionally been less engaged in the arts. We’re very grateful to National Lottery players for helping support arts and culture across the country and look forward to seeing the impact of National Lottery funding over the next 25 years.”

Darren Henley, CEO, Arts Council England (who are part of the National Lottery)

The stunt comes as new research from The National Lottery showed that creativity forms a big part of lives across the UK.

The Lowry has become Manchester’s most visited cultural attraction and its pivotal role in helping regenerate Salford’s docklands was confirmed by a report published in 2013. The Manchester think tank, New Economy, found that the venue had inspired a £1.4 billion revival of the area now known as Salford Quays. The area claims the BBC, ITV and Imperial War Museum North among its residents and employs more people than the docks did in their heyday.

Each year, the Lowry works with more than 35,000 local residents, many of them young people. Using the activity in its galleries and theatres it provides the opportunity to work with world-class actors and artists to tell their own stories. For example, one group of young people made a film co-starring the actress Maxine Peake which has been shown in every school in Salford.

● The National Lottery’s Birthday celebrations are running for an eight-week period (from 14 Oct until the beginning of December). There are some incredible activities planned across the UK to celebrate the good causes that have been made possible thanks to National Lottery players over the last 25 years.

● The National Lottery will do this by creating a major moment with illusionist and magician, Julius Dein, to make the Angel of the North disappear.