Scarlett hosts record-breaking attempt for largest-ever cream tea party
event at Sage Gateshead brings hundreds of people together from across the UK to celebrate The National Lottery’s 25th birthday. Community spirit shines through as folk from England, Scotland, Wales and Northern Ireland join in the Tea-Tyne fun. 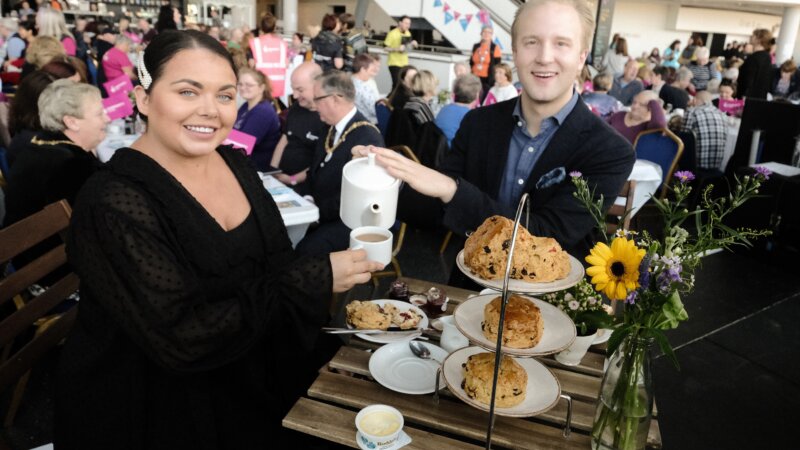 TV personality Scarlett Moffatt played host to a tasty world record attempt today (Wednesday 23 October). She joined 1,500 people from across the UK as they sought to munch their way into the Guinness World RecordsTM hall of fame by taking part in the Largest cream tea party.

The party – designed to bring people together – was held to celebrate The National Lottery’s 25th birthday and a quarter of a century of helping to bring communities together. Fittingly it took place at the iconic Sage Gateshead, a National Lottery funded venue.

It saw Scarlett back on her home turf in the North East, where she was joined by a huge range of people intent on beating the record and having some fun.

This included a coach load of older people from Glasgow who made the journey that day to support the attempt and meet new friends.

They were also joined by people from Northern Ireland and Wales, along with countless others from community groups and projects that have received National Lottery funding over the years.
Etiquette expert William Hanson was on hand to help solve the great cream tea debate – jam before cream, milk before tea or vice versa?

The previous world record was set in July last year with 978 people attending.

“Here in the North East we’re known for our community spirit - and we love a party - but what today showed me is that when people get together, great things happen. “Everyone here today has a story to tell about the amazing things they and others are doing in their communities with the help of National Lottery funding, and it was an honour to be part of it.”

“We’ve had such great support from The National Lottery so when we heard about this world record breaking attempt we really wanted to get involved. Over 50 people from my community group came with me here today and we had a whale of a time. We’re sad to be getting back on the coach to go home!”

The Senior Centre in Glasgow has received over £245,000 in National Lottery funding, and Betty attends at least three times a week. She takes full advantage of the art and exercise classes on offer as well as the meals served at the café.
But most importantly, she says that the Senior Centre is a place to meet friends and enjoy herself. Betty adds:
“After my husband died I would have been a recluse if it wasn’t for this
centre. It’s fabulous. There’s something for everyone – any class you want
they’ll get it organised.”

“Today’s giant cream tea party was all about bringing people and communities together – something that The National Lottery has been doing for 25 years. We’re delighted that people have joined us from across the UK to celebrate by sitting down together, talking and making friends over a cup of tea and a scone. It’s a simple act, but it can make a real difference to people’s lives.”

Over the last 25 years, The National Lottery has invested £1.1 billion into places that bring people together such as local parks, village halls, community centres and much more. Last year alone, thanks to National Lottery players, £52.5 million was shared with 1,445 community spaces.

The National Lottery also funds The Big Lunch, an annual UK-wide event that brings people and communities together over the first weekend in June. Around 6 million people take part in The Big Lunch each year.

By funding grassroots organisations, village halls, youth clubs and community centres, The National Lottery has been fundamental to community life in the UK. The majority (70 per cent) of National Lottery grants are for £10,000 or less, helping small projects make a big difference in their community.

William’s top tips for the Ultimate Cream Tea include:

1. Traditionally, scones are delicately broken in two with the hands, rather
than using a knife to cut into them.

3. Always offer tea, scones and indeed anything to your neighbours at the
dining table before you help yourself. Good manners are about putting
others before ourselves.

“It’s been hilarious to learn about afternoon tea etiquette and to share our little quirks and traditions about how we all enjoy afternoon tea where we’re from. But ultimately, it doesn’t matter where you’re from or how you like your cream tea, it’s all about bringing people together!”

Discover the positive impact playing the National Lottery has had on your
community over the past 25 years by visiting www.lotterygoodcauses.org.uk and get involved by using the 25th hashtag: #NationalLottery25

1. Drinking tea at a normal dining table? There’s no need to pick up the
saucer, unless you really want to. Just the cup will do. But drinking tea
at a low coffee table or standing up? It may help to hold the saucer at
chest height.

2. Milk and then tea or tea and then milk? It’s best to pour some tea into an
empty cup first so you can see how strong it is (or not). Hosts would
usually allow their guests to add milk, sugar or lemon to their own
preference.

3. If you have added sugar the best way to stir the tea is not in circular
motions but instead in gentle back and forth motions. This dissolves the
sugar quicker than going round and round.

4. Traditionally, scones are delicately broken in two with the hands, rather
than using a knife to cut into them.

5. Which goes first? Cream or jam? The answer is… unless you are in
Cornwall or Devon, you can do whichever combination you like. In
Cornwall they insist that Cornish clotted cream is added last’ in Devon
their cream is applied first. Whatever you do, please do not reassemble
the scone like a burger!

7. Scones used to be savoury affairs, griddled and cut into triangles - very
different to the round, sweet and baked products we have today. Nobody
knows if it was the English, Scottish or Irish who invented them but the
first printed mention of them dates back to a Scottish poem from 1513.

8. Always offer tea, scones and indeed anything to your neighbours at the
dining table before you help yourself. Good manners are about putting
others before ourselves.

The National Lottery’s Birthday celebrations are running for an eight-week
period (from 14 October until 6 December). There are some incredible
activities planned across the UK to celebrate the good causes that have
been made possible thanks to National Lottery players over the last 25
years.

The National Lottery’s first draw took place on 19 November 1994, more
than £40 billion has been raised for good causes in the areas of arts,
sport, heritage and community.

The 25th birthday is a moment to celebrate the extraordinary impact The
National Lottery has had on the UK, and to say thank you to National
Lottery players for contributing around £30 million to good causes every
week.

National Lottery has made more than 5,500 millionaires but its primary
purpose is giving to good causes - over 565,000 individual grants have
been awarded across the UK, that’s the equivalent of 200 life-changing
projects in every UK postcode district. 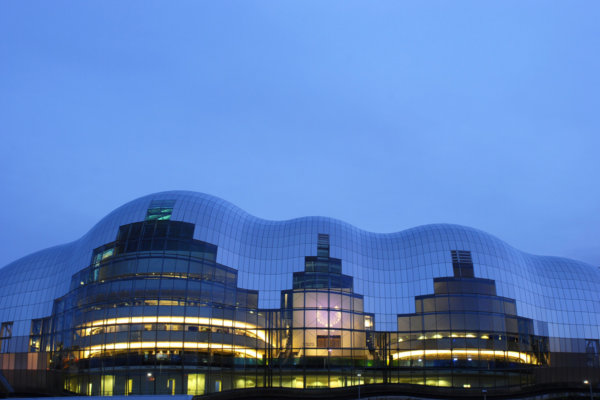 Sage Gateshead transformed the cultural life of the North East and has cemented its position as a vibrant mainstay ever since. It is a music centre deep-rooted in the North, but with an international profile, boasting one of the most striking buildings in the North East.