How a taxi driver helped me talk

William Hall is a 25-year army veteran who had fallen into isolation, that is until he met David Gibson, the founder of Fares4Free

William Hall had hit rock bottom. The former Royal Engineer had run out of cash and was a virtual prisoner in his maisonette in the Scottish town of Cumbernauld because of a medical condition that meant he was unable to climb stairs.

“I was living alone, and I couldn’t look after myself or my dog,” says the 25-year-old army veteran. “I’d got every penny out of the back of the couch and bought my dog the last bit of food I could afford. I’d been living on packets of cheap biscuits for about two weeks.”

William returned from a tour of Afghanistan in August 2013 with a condition – the result of a virus his doctors believe - that causes his immune system to attack the soft tissue in his body. The result was joint pain similar to severe arthritis and a loss of strength that forced him to use a wheelchair.

His army service ended in 2015, but because he was still contracted with the Army Reserve he was not medically discharged and could not claim his pension.

By 2016 he was penniless and unable to look after himself. “In all honesty, I was considering committing suicide,” he says. “The only thing that stopped me was that I couldn’t get anyone to look after my dog and I couldn’t just leave him.”

A few hours later David arrived at William’s flat with bags of food for him and his dog. “He had cereal and fresh things like milk that he paid for out of his own pocket,” says William. “I just broke down on the doorstep.”

A few days later David returned. He drove William to VC at the KC, a weekly veteran’s event at a church in Motherwell that has played an important part in the former soldier’s recovery. He also helped William find out what benefits he was entitled to.

“That was the turning point for me,” says William whose condition has improved thanks to medication. He has started a small gardening business, is employed as a part-time veteran peer worker by VC @ KC and volunteers at Fares4Free. “I never thought I’d get to this point,” he says. “And I definitely wouldn’t be around to experience it if it wasn’t for David.”

David has been a taxi driver in the Glasgow area for about 20 years. When he found himself “bored and looking for a change of direction” he offered his driving services to various charities but received little interest. “I couldn’t give free taxi rides away,” he laughs.

The breakthrough came when he realised that many armed forces veterans in Scotland – particularly those in rural areas – were struggling to access the health and rehabilitation services they required due to a lack of transport. “For example, the main centre for the treatment of PTSD (post-traumatic stress disorder) is in South Ayrshire and we had people from the north of Scotland accessing it. When you’re dealing with PTSD or anxiety it can be very hard to use public transport.”

David also realised that a lack of transport left some veterans feeling lonely and isolated. Realising he had found a group in real need of help, he started Fares4Free in April 2016.

The charity was awarded its first grant from The National Lottery later that year and David describes the cheque for £8,820 as “the most important grant we’ve ever got”. “It [the grant] let me prove the concept and following on from that, organisations like the Ministry of Defence saw the value.”

When Fares4Free started David was juggling paid driving with free rides. It was tough. “We ran up some credit card bills, but I was lucky that you couldn’t get a more tolerant person than my wife.”

His perseverance paid off, however, and Fares4Free grew rapidly. The initiative now operates across Scotland with the support of more than 30 taxi companies ranging from big firms with hundreds of cabs to small companies and self-employed drivers. The charity is also supported by local councils and partner charities and is extending its work to help elderly people, people with dementia and disabled people.

The drivers – some of whom have mental health training – form strong bonds with many of the veterans they transport. They deliver shopping, share meals and most importantly, perhaps, provide a sounding board when times are tough. Passengers and drivers go from being strangers to becoming friends and sharing confidences. “Veterans have a certain dark humour - we call it therapeutic banter,” says David. “We let people talk if they want to or say nothing and fall asleep if they want to.”

David says the mission of Fares4Free is to get veterans to “the point of independence and self-sufficiency” and in nine out of ten cases that’s what happens. “The benefits kick in and they can breathe out and relax a bit,” he says.

“The majority of veterans come out of the service as well-adjusted individuals, but there is a significant minority that needs support,” he says. “After all, everyone has a dip now and then.”

David’s efforts to help veterans like William have been recognised with a prestigious Local Legend Award as part of the 25th Birthday National Lottery Awards. Presented by former Strictly winner Ore Oduba, on BBC1 on November 19th, the Local Legend Award recognises a person that has made an outstanding contribution to their local area.

The winners were selected by a panel made up of representatives from The National Lottery. 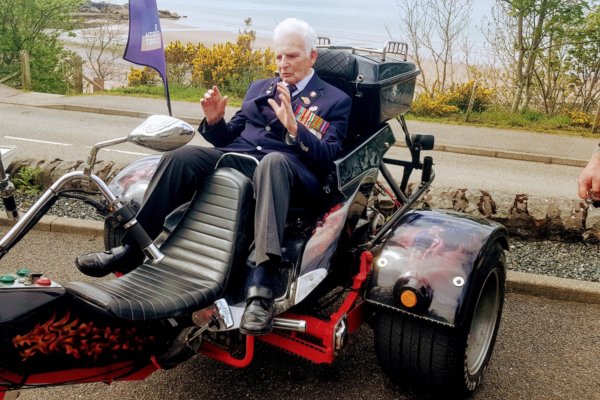