Marcus is hoping to follow in the footsteps of Dom Parsons, who won the first male skeleton medal in over 70 years when he took bronze in South Korea.

In recent years, women have dominated British skeleton’s success at the Winter Olympics, having won the lion’s share of Team GB’s medals in the sport.

But heading into Beijing 2022, there’s a real buzz around Britain’s male competitors, including 29-year-old Marcus Wyatt.

Wyatt narrowly missed out on selection for PyeongChang in 2018 but this year will head to China in pursuit of a podium place.

After watching on as British women medalled in five consecutive Games for the all-conquering skeleton squad, Wyatt is hoping to follow in the footsteps of Dom Parsons who won the first male skeleton medal in over 70 years when he took bronze in South Korea.

“It would be a huge dream come true [to win gold], that’s what I’m aiming for,” said Wyatt, who is one of over 1,000 athletes able to train full-time, access the world’s best coaches and benefit from pioneering technology, science and medical support thanks to vital National Lottery funding.

“If I can be that man that brings home the gold then that would be unbelievable.”

“At the Olympics any medal is a huge success, if you offered me a bronze, I’d absolutely bite your hand off.

“The women have obviously had better results, but the men have also had success, especially Dom. if I can keep that going, that’s the plan.” 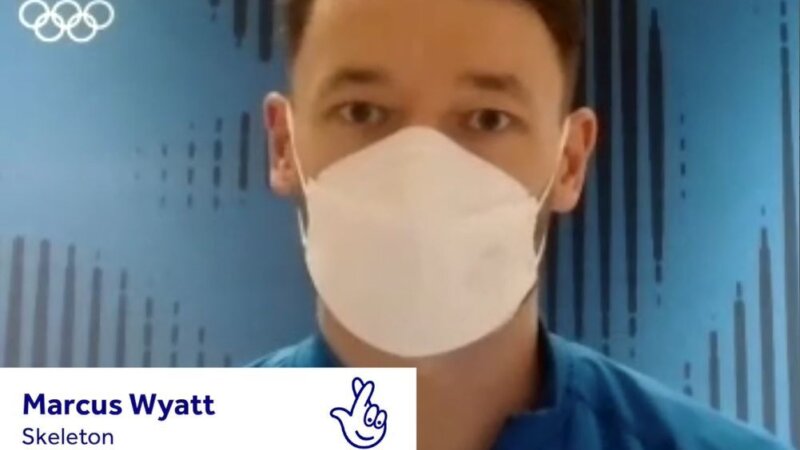 Many winning skeleton athletes take advantage of backgrounds in other sports to propel them to success, such as Team GB’s Lizzy Yarnold, who originally trained as a heptathlete.

Wyatt is no different, having experienced success in American Football for Swansea University Titans.

He was aiming to play semi-pro in Europe before making the switch to skeleton, a move he admits has changed his life.

“Every athlete when they are brought in from different sports - the coaches and the staff know how to get the best out of every single one and ultimately turn them into Olympic medal-winning athletes.

“I think it just shows how amazing it is that we can compete with the best in the world and we don’t have a track.

“The philosophy for us is that we try and use it as an advantage. Other nations have multiple home tracks but as a nation we are really good at learning these tracks quickly when it matters.

“I wasn’t going to make it in other sports and it has transformed my life, so if that’s the legacy that is brilliant.”

Wyatt is full of confidence heading back to Beijing where he won silver in the Olympic test event back in October and would love nothing more than to repeat the trick when it matters most.

He said: “That was the only time anyone has been there, obviously apart from the home athletes. So, to click with the track and prove that I can perform there to a high level so quickly was a huge boost.

“I’m going out to Beijing and picking up where I left off. I’m not trying to make a huge jump to the medals - so that’s my focus.”