Discovering the lost art of play

Ten minutes after entering Storyland, a kid-scale fantasy world illuminated by coloured lights, two-year-old Saoirse O’Hagan was already immersed in the magic of The Imaginarium. “She’s telling me she can see fairies,” said her mother, Nicole. “Which is absolutely brilliant.”

Seen from the street, The Imaginarium in Newry, a city in Northern Ireland, is an unremarkable place. Housed in a large warehouse that was once a bowling alley, there is little to suggest the wonders that lie behind its doors.

But as Nicole, Saoirse, her six-year-old brother Shea and baby sister Caoimhe soon discovered, the building is a place where imaginations run wild and children of all ages and abilities rediscover the lost art of making their own fun.

As well as Storyland – home to a resident troll with an allergy to jam sandwiches, a beach with real sand and a steampunk ship – children can visit The Imagination Lab where brightly coloured sea creatures or anything else that takes a child’s fancy, can be conjured up from recycled plastic bottles, pipe cleaners and copious amounts of glue. There are dinosaur costumes to wear, books to be read and a café where parents are encouraged to put down their phones – the absence of wi-fi is quite deliberate – and sit and chat to the staff.

“This is an accessible space for children of all abilities,” says Grainne Powell, the Chief Executive of Sticky Fingers, the arts organisation that opened The Imaginarium in August 2017. “Our vision was to create a magical interactive land where all children would have the same opportunity to play and engage in the arts.”

Newry, a city close to the border with Ireland, had a pressing need for a place where children could escape real life and let their imaginations run wild. “There is a massive issue with play deprivation especially in this area,” says Grainne. “Newry would have the highest population of children and young people in Northern Ireland and also some of the highest rates of child poverty. We see that on a day to day basis.”

The point of The Imaginarium, however, is that it is open and accessible to everyone: young and old, able and disabled. Members of the East European families that live nearby mingle with visitors from Belfast, Derry and the rest of the UK. It has become a community hub where bands and amateur dramatics groups hold rehearsals, students prepare art work for their GCSE and A-Level exams and school groups turn recycled items into all manner of fantastical creatures.

The big building has a capacity of 150 people and in the summer months it is full.

In an effort to meet demand and expand The Imaginarium’s capabilities, new facilities are being built in the parts of the cavernous building that remain empty. A 200-seat children’s theatre and a second Storyland – a place for older children called Future World that will make extensive use of technology – are part of this second phase of development.

The Imaginarium’s work isn’t confined to the walls of the old warehouse either. Sticky Fingers – which was founded in 2002 - runs an extensive outreach programme that sees it working with older people, teenagers and people with dementia. All of its staff are dementia-friendly trained.

Funding from The National Lottery has been essential to the creation and running of The Imaginarium, says Grainne. “We’re core funded by the Arts Council so without the Lottery we wouldn’t be here. In terms of running costs, equipment and everything else it’s all Lottery money – it plays a massive role.”

Another visitor to The Imaginarium, 4-year-old Lucas McBrearty, was happily making a spider out of discarded bottles, pipe cleaners, cotton wool and copious amounts of glue. “It’s called Sticky Fingers because you get sticky fingers – and you can wash them again,” he said holding up his hands for inspection.

Lucas’ grandmother, Gorretti Quinn, described The Imaginarium as a “fabulous place”. “It’s old fashioned play that the kids don’t get anymore,” she said. “It’s also a great way for children to be together, to mix and learn from each other.” 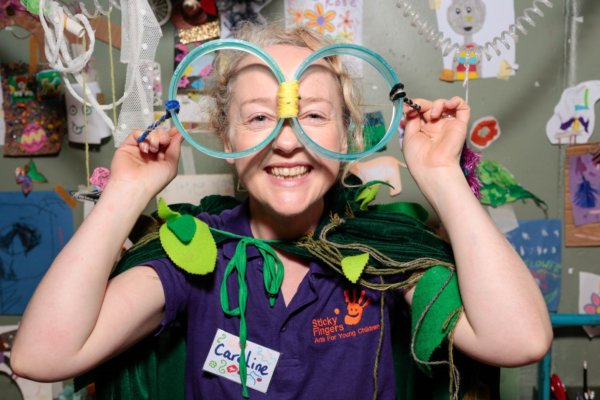