Iconic sports venues across England and Wales are today changing their names for a day to honour grassroots sport community workers and volunteers who have gone above and beyond during lockdown, whilst sporting legend Carl Frampton is also making special dedications to those unsung heroes in Northern Ireland who have stepped to the fore during the pandemic.

The venue name changes and the special dedications are taking place following the findings of a new UK-wide study commissioned by The National Lottery and published today, which shows that nearly half of sport fans (44%) believe 2020 should be the year we celebrate community sportspeople in the same way we celebrate professionals, with one in three (38%) saying the trying circumstances have made them more appreciative of local sports volunteers, and two thirds (63%) saying the pandemic has increased their love of sports and being active.

The home of England Rugby, Twickenham has been changed to the O’Brien Palmer Williams Twickenham Stadium, after three such examples of local sports volunteers. The name change will celebrate Lucy O’Brien, Breeze Palmer and Matt Williams of Avonmouth Old Boys RUFC Ladies team, who delivered hundreds of hampers, food boxes and even flowers to those shielding, the vulnerable and those on the frontline during the pandemic.

In cricket, The Kia Oval, home of Surrey County Cricket Club, changed its name to the Kia Shahidul Alam Ratan Oval in honour of the hardworking leader of Capital Kids Cricket, a charity which uses cricket as a tool to change the lives of disadvantaged children, and which created a digital activity zone to keep kids active and learning during lockdown.

Other venues involved include the Paula Radcliffe Athletics Track, at Loughborough University, which will be renamed The Kayla Kavanagh Athletic Track in honour of a Barnsley-based mum who set up the Mother Runners running club after discovering for herself the physical and mental benefits of running. During lockdown, Mother Runners inspired women in the local area to use the time to look after their physical health and created an online community where the women were open about their lockdown struggles and mental health.

Redgrave and Pinsent Rowing Lake is renamed Turner Farquharson Rowing Lake after Isobel Turner and Lawrence Farquharson, two coaches from London Youth Rowing who used their roles at the organisation to change the lives of young people for the better during a very difficult year. 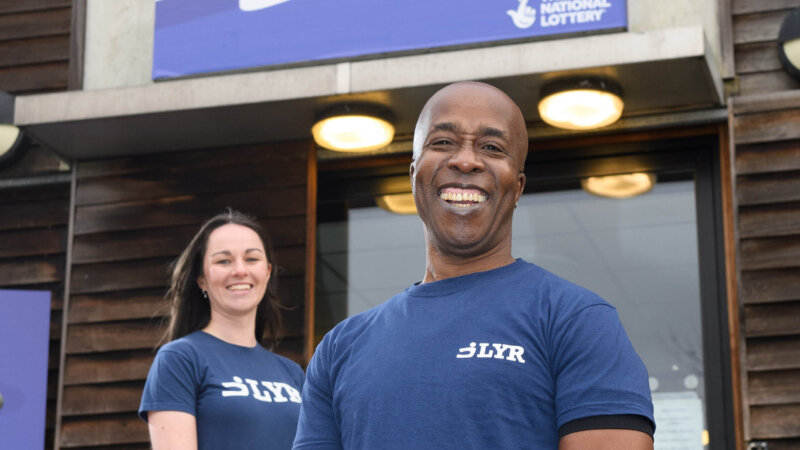 In Wales, the Geraint Thomas National Velodrome of Wales, usually named after the previous Tour De France winner, will become the Chris Davies National Velodrome of Wales for the day. Chris is accepting the honour on behalf of Lliswerry Runners, which plays a huge part in the Newport sports community. During the pandemic, Chris and the club worked tirelessly to keep members active and offer support and encouragement for people of all abilities. They created virtual events and reduced capacity club events which brought the community together in a safe environment, during the difficulties of the pandemic.

The Sport Wales National Outdoor Centre, in Caernarfon, will be renamed The Ken Newing National Outdoor Centre in honour of a local sports volunteer who, despite shielding, organised e-sailing programmes and started conversations across social media encouraging club members to share their stories of sailing, bringing the community together at a time when many would have otherwise been alone.

In Northern Ireland, boxer Carl Frampton surprised Midland Boxing Club coaches Lee Cochrane and Keith Dallas who spent lockdown delivering meals to the elderly in their north Belfast community. On some occasions Lee was providing food from his own house to older people he was looking out for, so Carl surprised the two coaches with a range of boxing equipment from The National Lottery. The gift and surprise were also shared with Amy Stewart from Monkstown Boxing Club, whose members turned its gym into a makeshift soup kitchen with volunteers helping to deliver food packages to the doorstep of people in the area who are self-isolating and vulnerable. Both Midlands ABC and Monkstown Boxing club are among the thousands of sporting organisations supported by the £30m per week that is raised by National Lottery players across the UK.

, “Every sports fan and player knows the positive impact that grassroots clubs, projects, coaches and volunteers have on individuals and local communities. This has obviously been a year like no other, a year where those unheralded champions of sport have stepped forward and done all they can to keep people motivated and engaged in sport and physical activity. A year when the support given to grassroots sports projects from people playing The National Lottery - which raises £30m a week for good causes – has never been needed more. It is fitting that all this hard work by countless individuals is recognised – and what better way to do that than by renaming iconic sports venues in their name. They fully deserve the recognition now more than ever.”

“At Capital Kids Cricket, we look to improve the physical, social and emotional development of disadvantaged children and young people living in the most deprived areas of London. We are a fully inclusive organisation who provide a range of sporting and social opportunities. Activities are carried out in state schools, hospitals, community centres, local parks and residential centres away from London, as we want to have a positive impact on every disadvantaged child and young person in the capital. . “We are humbled to get this recognition for the work Capital Kids Cricket does and would like to thank National Lottery players for the funding that helps us to engage and enrich thousands of children each year. I am delighted and slightly overwhelmed that my name will be across the Oval Cricket Ground for a day, which is a huge honour that will definitely motivate all of us to continue work during the current pandemic and beyond.”

Speaking as his name was revealed at The Kia Oval, Shahidul Alam Ratan said:

“With the help of The National Lottery’s players, thousands of grassroots sports workers and volunteers from local clubs and organisations across the UK have been be able to continue to help people and communities to remain active, connected and motivated during the COVID-19 pandemic. Grassroots sport also has a fundamental role to play in providing much needed physical and mental wellbeing in these difficult times.”