National Lottery players have raised over £596 million for 700 science-related projects over the last 25 years, with over £310 million having gone towards science museums across the UK.

Major Tim Peake said: “The National Lottery has played a significant part in furthering science and education over the past 25 years and this can be seen in abundance through these attractions. The Science Museum, for instance, is visited by over 3.3 million people a year who flock to see remarkable objects like The Apollo 10 command module, a truly inspiring exhibit.

“Jodrell Bank is also particularly special to me, since the inspiration for my career path was born by simply looking up to the stars and being intensely curious about what the universe was all about. Jodrell gives us that innate connection to our origins and how we came to be here. No matter what your age, every one of these experiences provide an amazing opportunity to educate and inspire – two things which are integral to being human. It’s absolutely wonderful that The National Lottery has helped make these experiences possible, which will continue to open the eyes and minds of this generation and the ones to come.”

From discovering the great and gruesome history of medicine at the Science Museum’s new Medicine: The Wellcome Galleries, to inspiring your inner astronaut at Jodrell Bank Discovery Centre, there’s something to fascinate all ages in The National Lottery’s new list.

Jodrell Bank Discovery Centre (Manchester, North England) - The Jodrell Bank Observatory is a UENESCO World Heritage Site offering visitors the opportunity to explore the wonders of the universe. You will find one of the biggest and most powerful radio telescopes in the world located at Jodrell Bank. The National Lottery is supporting the centre’s First Light Project which will include a spectacular new gallery and interpretation space due to open in 2021. Visitors will be able to engage with and learn about the site’s fantastic stories, amazing feats of post-war engineering, and the creation of the Grade-1 listed Lovell telescope.

Eden Project (Cornwall, South West England) – The Eden Project comprises a number of massive Biomes which house the largest rainforest in captivity, stunning plants, exhibitions and striking contemporary gardens. The Eden Project generates more than £2 billion for the regional economy – and it was created thanks to National Lottery players, who made a £56million award into The Eden Project possible. As an educational charity, The Eden projects runs exciting year-round family events and summer concerts.

University Museum of Zoology (Cambridge, East England) - The University Museum of Zoology was founded in 1814 and is one of the largest natural history collections in the UK, displaying thousands of specimens spanning the entire animal kingdom – from elephants, to giant ground sloths to giraffes, reptiles, insects and more. The Museum re-opened in 2018 after a five-year £4.1million redevelopment – including nearly £2million of funding from The National Lottery. The museum is part of the University of Cambridge Department of Zoology and welcomes over 150,000 visitors every year.

Royal Navy Submarine Museum (Portsmouth, South England) - The Royal Navy Submarine Museum, part of The National Museum of the Royal Navy, is a maritime museum tracing the international history of submarine development from the age of Alexander the Great to the present day. Visitors to this museum can get up close to the only remaining Second World War era submarine, HMS Alliance. Over the last decade, The National Lottery has contributed around £6.4million to the museum helping tell the Royal Navy story – so why not go and explore the decks and narrow corridors, look through the original periscope and hear the stories of those who served onboard the HMS Alliance.


Stargazing with Revitalising Redesdale (Redesdale, North East England) - Redesdale is a remote upland area in the wild heart of Northumberland. This land was once a lawless frontier but today this area is one of the most peaceful parts in England. The National Lottery awarded £2.8 million to Revitalising Redesdale, a Landscape Partnership Scheme, which aims to conserve and enhance Redesdale’s rich cultural heritage, landscape and wildlife. Thanks to money raised by National Lottery players, the project provides opportunities for local people to get involved in conservation projects and take part in activities such as stargazing and guided walks.

Oxford University Museum of Natural History (Oxford, South) – This award-winning museum is home to seven million objects, which include the world's first scientifically described dinosaur and the only soft tissue remains of the extinct dodo. In June, it received over £700,000 from The National Lottery for its ambitious project, HOPE for the Future – Heritage, Outreach and Preservation of Entomology, aimed at safeguarding the museum’s nationally-significant British insect collections, create new public spaces, and embark on a major programme of community outreach and education.

As part of The National Lottery’s 25th Birthday celebrations, all of the attractions featured in the list, alongside hundreds more nationwide, will be offering free entry, discounts, and other special offers to anyone arriving with a National Lottery ticket (past or present) over the next few days, as part of the celebration #ThanksToYou for 25 Years.

Tim Peake has various links to The National Lottery – the Science Museum is home to Soyuz TMA-19M, the capsule which transported Tim Peake and his crew into space and back as part of the Principia mission in 2015. Tim Peake’s Sokol KV-2 emergency spacesuit is also part of the Science Museum Group Collection and is now inspiring visitors to the National Space Centre in Leicester where is it on loan. In addition, Major Tim Peake is a Scouts Ambassador – The National Lottery has awarded £12million to the Scouts since 2008.

“Over the twenty five years of the National Lottery, we’ve been delighted to support scientific and educational institutions and projects as they have told the inspiring stories of science, engineering, medicine, space exploration, zoology, technology and so much more. Telling those stories has opened up whole worlds of scientific heritage to be enjoyed and to inspire new generations to play their own part in shaping the world in which we live. Thanks to National Lottery players over 596 million pounds has been invested into science museums and science related projects.”

Visit www.thankstoyou.org.uk to find the full list and search all the offers taking place in your area and filter by specific interest.

Discover the positive impact playing the National Lottery has had on your community over the past 25 years by visiting www.lotterygoodcauses.org.uk and get involved by using the 25th hashtag: #NationalLottery25.

Within this time, anyone who presents a National Lottery ticket, Scratchcard or proof of playing online at national-lottery.co.uk will be able to access special offers at venues taking part in #ThanksToYou. The date of draw/purchase is not relevant.

All National Lottery games qualify (including National Lottery draw-based games and National Lottery Scratchcards) purchased in-store and online/via app.
Proof of purchase of a National Lottery game can be either hard copy or digital. Visit the #ThanksToYou events page thankstoyou.org.uk to search for special offers near you.
Please check the individual venue listings for the specific offer, dates, times and other terms and conditions.
All offers are subject to availability.


About The National Lottery and its 25th Birthday celebration:


The National Lottery’s Birthday celebrations are running for eight weeks (from 14 Oct until 6 December). There are some incredible activities planned across the UK to celebrate the good causes that have been made possible thanks to National Lottery players over the last 25 years.

The National Lottery has made more than 5,500 millionaires but its primary purpose is giving to good causes - over 565,000 individual grants have been awarded across the UK, that’s the equivalent of 200 life-changing projects in every UK postcode district 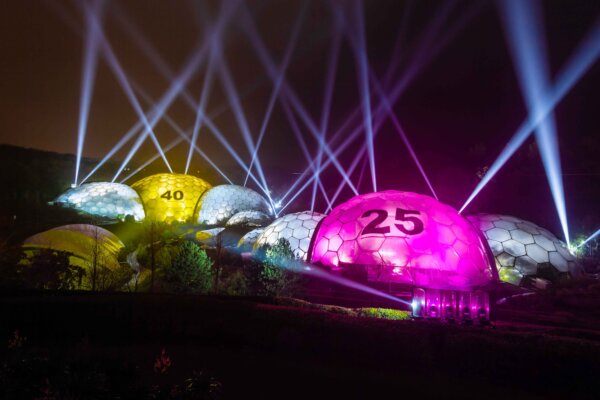