Ryan Evans broke down in tears after he got the phone call confirming he’d landed a job as an Academy coach with Leicester Riders, the UK’s oldest professional basketball club.

For the 21-year-old from Melton Mowbray, the opportunity to coach young players at one of the club’s seven Academy teams was a significant milestone on his extraordinary journey from being an isolated, self-doubting teenager to a confident young man.

“Going to this new job I’m excited and nervous because it’s a big, big deal,” he says. “It reaffirms everything I’d done with The YES Project.”

Ryan is referring to the Youth Employability Support (YES) Project, a scheme jointly funded by The National Lottery and the European Social Fund that helps people aged 15-24 take steps towards employment or further education. Since starting in 2016, YES – a partnership between seven youth organisations and charities – has helped more than 400 young people with issues ranging from low self-esteem to disability and mental health illness to identify their potential and move forward in life.

The YES Project uses specialist support, mentoring, work placements and team building, to help participants recognise their own abilities, says Collette Bird, who runs the scheme’s youth leadership group. “We look at every step of the journey and help them recognise their skills,” she says. “It’s not just about employment or education, it’s about enabling them to recognise their self-worth, getting them to believe in themselves and see their talent.”

“At school I could be confident – I’d always step up to sport or creative activities – but if someone took me down a peg it would eat away at me,” he says. “When I was recovering [from knee surgery] I hit rock bottom.”

The YES Project has received £1.9m of funding from The National Lottery Community Fund and the European Social Fund under the NLCF’s Building Better Opportunities strand. Due to its successes, the YES Project has been extended for a further three years with £1.7m additional funding. Since The National Lottery’s first draw took place on 19 November 1994, more than £40 billion has been raised for good causes in the areas of arts, sport, heritage and community.

Ryan was 18 when he hit a low point in life after undergoing knee surgery. “I’d totalled it in a skiing accident,” he says with a grimace. “I’d sliced the front of my knee open and ruptured all the cruciate ligaments.”

As he recuperated at his parents’ home in Melton Mowbray, his anxiety began to build. He compared his own situation – he’d decided not to go to university – with friends who seemed to be laying the groundwork for successful careers.

“I had too much time to reflect and it was really destructive,” he says. “At school I could be confident – I’d always step up to sport or creative activities – but if someone took me down a peg it would eat away at me,” he says. “When I was recovering [from knee surgery] I hit rock bottom.”

Ryan was stuck at home, wearing a leg brace and getting around on crutches, when he heard about the YES Project’s nine-week media course. He enrolled – “I hobbled there two days a week” – and learned how to make short films. More importantly, he got out of the house, began interacting with other people again and made the connection with the YES Project that would transform his life.

Enthused by his experience of the media course, Ryan signed up to a YES Project youth leadership course. A key worker arranged for him to gain work experience at the House of Verse, a Leicester-based collective made up of spoken word artists, beatboxers, dancers and other creatives.

Jenny Hibberd, a performance poet and the founder of House of Verse, took Ryan under her wing. “I’d always felt I needed a mentor,” he says, “and Jenny was an absolutely fantastic person to work for. She has 110 per cent energy and enthusiasm for what she does. I was astonished by what she was doing.”

After four months at House of Verse learning about every aspect of running a creative business, Ryan was back on his feet. “It built a lot of resilience,” he says. “If I hadn’t made that decision to get off my backside and throw myself into it [the media course] I wouldn’t be sat here talking to you now. Every milestone I’ve hit in the past three years since leaving college couldn’t have happened without the YES Project.”

There have been bumps along the way, of course. After finishing at House of Verse he enrolled in an undergraduate course at a university in Leicester. He left after a year, an experience that delivered another blow to his confidence and self-esteem. This time, the lessons he’d learned at the YES Project helped him rally more quickly.

He joined a fitness group called Blood, Sweat and Tyres – “at the time I hated the way I looked” – and discovered a talent for motivating people to exercise. He ended up creating his own fitness business called CAPS (Control, Agility, Power and Speed).

In May, 2018 he applied for an apprenticeship as a sport coach in schools. “I ended up getting it after three interviews and was completely shocked. I really felt I’d achieved something,” he says. “I’ve been training kids at my own secondary school in Melton Mowbray.”

Now, he is embarking on another chapter in his career. When Leicester Riders told him he had got the coaching job he thought they must have got the wrong person. “I still have self-belief issues, but it’s nowhere near as bad,” he says with a smile.

Everyone who works with the YES Project has had their self-esteem damaged by the issues they’ve faced, says Collette. “You might have someone who has lost a parent at a young age or someone who has a serious mental health disorder, but the impact it is had on their school years is only recognised when they leave school. This is where the YES Project comes in, to help these young people recognise their true strengths despite the sometimes debilitating obstacles they face,” she says. “What we’re doing is helping them to work through their barriers or manage their condition so they can move forward and have a successful future.”

Loved this story? You can read more inspirational stories around the National Lottery’s 25th Birthday by clicking here 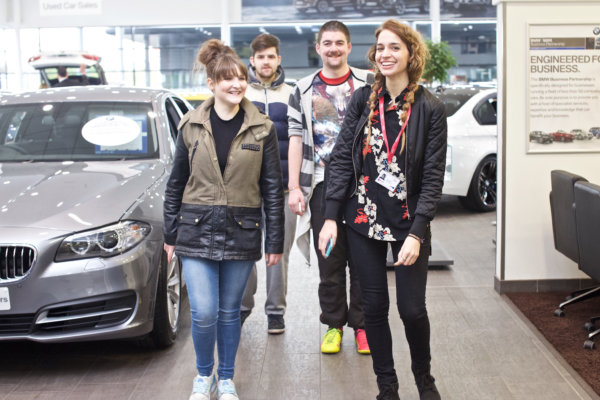