Beating depression to the punch

One is an elite boxer who has represented England at the Commonwealth Games; the other signed up for weekly exercise and sparring sessions at a Birmingham gym after becoming unemployed and homeless.

But 21-year-old GB boxer Ben Whittaker and 58-year-old Adrian, both acknowledge that the intensity and discipline of boxing training offers benefits far broader than a flat stomach and a powerful right hook.

“Boxing has changed my life,” says Ben during a visit to the Pat Benson Boxing Academy, a gym in central Birmingham that offers a range of programmes designed to improve the health and wellbeing of people with mental health issues.

Ben, whose sights are fixed firmly on winning gold at the Tokyo Olympics in 2020, was diagnosed with ADHD [Attention Deficit Hyperactivity Disorder] when he was a child. His father took him to a gym to “burn off some energy and get a bit of discipline” and he has never looked back.

“At school I thought I was a tough kid who could fight anyone,” he says. “But when you get in the ring and spar with someone who’s a real boxer you think ‘OK, I’m not as strong as I thought I was’. It’s taught me a bit of discipline and respect for my elders. And when you go in the gym as a young lad the older lads look after you – it’s kind of a family.”

Ben, who took up the sport at the age of seven and claimed his first junior title in 2011 at the age of 13, says boxing offers significant mental health benefits. “As soon as I get to the gym and hit that punch bag my worries are gone,” he says.

Adrian, who is enrolled in a MindFit course at the Academy, couldn’t agree more. He has been unemployed and homeless since November last year, and says the intensity of the training at the Academy has done wonders for his physical and mental wellbeing.

He had tried a variety of sports over the years including judo, cycling and swimming. Adrian also enjoyed watching boxing on television – usually with a plate of spaghetti or a pizza on his lap – but had never pulled on a pair of gloves.

Finding himself unemployed and homeless was incredibly tough, he says, but it did provide the impetus to get help. “Sometimes you have to reach rock bottom before you realise there are great places like the Pat Benson Boxing Academy that are more than willing to open the doors to you,” he says. “These guys are offering training facilities for anyone who is looking to change their life.”

As well as losing weight and improving his cardiovascular fitness, Adrian says the twice-weekly MindFit sessions have helped him look at life very differently.

“I’m much more positive now,” he says. “I’m always looking at the positives in any given situation nowadays. It’s almost as if someone’s waved a magic wand and said ‘you’re no longer going to think about the negative aspects of life – you’re going to get out of bed and think about positives’.”

The support and encouragement of his trainers and fellow MindFit participants have also done wonders for his confidence and self-esteem. Even his diet has been transformed. “I’m eating more fruit each day than I used to eat in a week,” he laughs.

Paddy Benson, the Managing Director of the Academy and grandson of its figurehead Pat Benson, says the beneficial effects sport and exercise should never be underestimated. MindFit, a concept launched at the Academy several years ago as a weekly one-hour boxing session, has evolved over time thanks to funding from the National Lottery. Since The National Lottery’s first draw took place on 19 November 1994, more than £40 billion has been raised for good causes in the areas of arts, sport, heritage and community.

The current MindFit programme is a twice-weekly session that combines circuit training, weight training and floor exercises with skills training.

“The idea of hitting the punch bag or pads gets people through the door,” says Paddy, “but there are lots of knock on effects [from boxing training] such as problem solving, communication skills, working with other people and having the confidence to speak to other people. We had one chap who wouldn’t leave his house. His case worker drove him here – now he gets two buses to attend.”

The skills training is supported by Sport England and is designed to help MindFit participants work as volunteers at other sporting organisations or at major sporting events. Says Paddy: “It gives them some work experience, gets them back into society and increases their confidence and communications skills.”

MindFit is just one of the mental health programmes run by the Academy using a three-year grant of £306,059 from The National Lottery Community Fund (formerly the Big Lottery Fund). Awarded in October, 2017 the cash funded the recruitment of four additional staff members.

“The money transformed this place by funding salaries and getting the right staff into jobs,” says Paddy. “When you have good, experienced staff running the projects correctly you can achieve incredible things.”

Adrian hopes his story will make more people realise that funds from The National Lottery are really changing lives. “I can’t say enough good things about the National Lottery,” he says. “Lottery funding helps people with their training regimes, whether it is athletes at the London Olympics or people like me.” 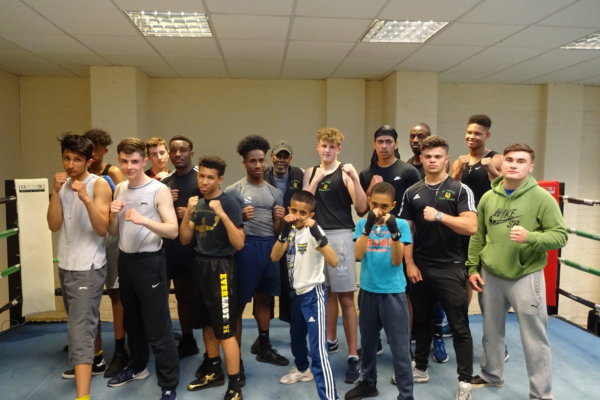