Arts and crafts organisation Craftspace believe the lives of locals and athletes alike can be changed by 4600 Gifts - a special Commonwealth Games gift project.

4600 hand-embellished gifts, made from upcycling locally sourced materials, have been lovingly made by the people of Birmingham for each athlete competing at the Games.

Representatives from all 72 nations will receive the gifts, carrying a message of welcome from one hand to another, in their Birmingham 2022 welcome packs.

4600 hand-embellished gifts, made from upcycling locally sourced materials, have been lovingly made by the people of Birmingham for each athlete competing at the Games.

Representatives from all 72 nations will receive the gifts, carrying a message of welcome from one hand to another, in their Birmingham 2022 welcome packs.

“The definition of a gift is something you give where you don’t expect anything in return, so it’s a very powerful idea,” said Craftspace director Deirdre Figueiredo.

“Everyone has a gift to give and our aim is to give a message of unity, friendship and togetherness.

“It’s from one human hand to another and we wanted that to be our warm welcome from the city.”

Members of the public were invited to create gifts at various workshops around the city including Grand Central, South Yardling and Colmore Business District.

The gifts are made to a template but unique in their colour and design, principally consisting of two interlocked embroidered rings.

The project also gives a nod to the city’s industrial heritage, which has seen it referred to as ‘the city of 1000 trades.’

“We’ve been making crafts in Birmingham for centuries and we wanted to reimagine the idea of the ‘workshop of the world,'” said Deirdre.

“We’re very used to buying mass produced goods from factories and we wanted to reinvent the idea of the production line.

“There’s been an army of gift makers and they could be anybody - you didn’t have to be skilled, it was very democratic.

“We told people to put their love and energy into the wrapping, the knotting, the crochet, the sewing.

“At the moment of connecting the two rings, think about your message to the athlete, that’s your moment of putting the most love and energy into it.

“The cultural programme wanted an ambitious project and I think we delivered on that!”

Craftspace consulted five local artists and a number of English athletes attended workshops as they formulated the template for 4600 Gifts.

The group were committed from the off to recognising the complicated legacy of the Commonwealth.

“We had lots of deep conversations at the beginning about the uncomfortable aspect of the Commonwealth,” said Deirdre.

“We were very careful in picking the team that had a deep connection to the feelings and ideas.

“We wanted to represent what the Commonwealth stands for in a positive way but also the less comfortable history.

“We used to export metals and products around the world to Commonwealth countries, now the world has to come to Birmingham.

“We are here making our mark - so the message was to celebrate what we have here, let’s give them a message of unity, friendship and togetherness that sits outside everything horrible going on in the world.”

National Lottery players raise more than £30million a week for good causes including vital funding into the arts, culture and heritage sectors. Find out how your numbers make amazing happen at www.lotterygoodcauses.org.uk. Find out more about the National Lottery supported Birmingham 2022 Festival by using the hashtag #B2022Festival. 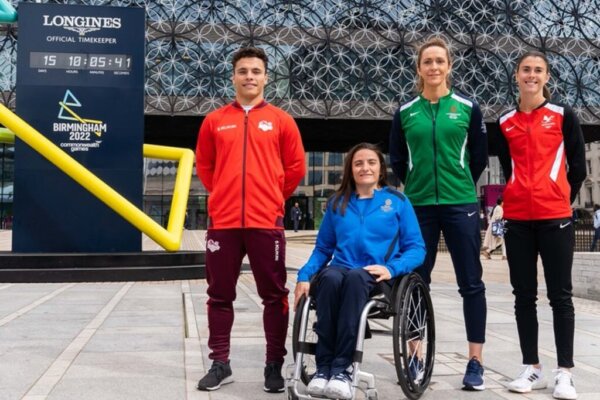