Thanks for the memories

Norman Hickson hugs his wife, Ellen, and punches the air as Super League side Wigan Warriors run in the first of eight tries during their 46-16 victory over Wakefield Trinity. “Coming to a match like this with your wife, well, it’s brilliant isn’t it,” says the 80-year-old. “I trust the people in this group and it gives me a break from everyday life.”

Norman’s life became more complicated when Ellen was diagnosed with dementia four years ago. But since joining Rugby Memories – a dementia friendly group set up by the Wigan Warriors Community Foundation – the couple have discovered a community that offers support, empathy and some much needed fun.

“As a carer, it’s nice to know that there are people like ourselves going through the same thing,” says Norman, a long time rugby league fan. “Ellen’s been the love of my life for 50 years and that doesn’t change. But it’s nice to meet other people who don’t shy away [from dementia], who want to make you happy by organising things like today. That’s beautiful.”

Rugby Memories was set up in 2018 with the help of a £7,500 grant from The National Lottery’s Awards for All. Initially, the group was envisaged as a way to help people facing loneliness and isolation by introducing them to people with a shared interest in rugby league.

Claire Taylor, the Community Foundation’s Health and Wellbeing Manager, says the group decided to become dementia friendly after she and some of her colleagues attended a workshop on the subject run by Wigan council. “We realised that this group could be dementia friendly and put more of the focus on reminiscing,” she says. “The results have been brilliant. Even if they don’t remember what happened at the group the feeling stays with them. If they’ve had a good time it carries over when they go home.”

As well as tickets to matches and visits from former and current players, Rugby Memories has organised string of events including a casino night (using specially minted Wigan Warriors currency), visits to a stables and a vintage car show and an indoor bowling session. The group even has a therapy dog – a small dog who is happy to sit on people’s laps and be petted. “Rugby is just the hook,” says Claire. “A lot of people come because they are or used to be rugby fans, but once they’re here it’s an open forum.”

Claire is determined to keep coming up with new experiences for the members. “I don’t ever want it to become stale,” she says. “If I said we’re just going to drink tea, eat cake and chat they would because they’re friends now. But I don’t want them to get bored – I want them to look forward to the sessions and have new experiences.”

As well as helping people with dementia, the Rugby Memories group also supports their family members and carers. “It’s a respite for those people,” explains Claire. “If they go out shopping they have to constantly watch them. But when they’re at the group they can relax because they know they’re in a safe space and there are other people who understand the condition.”

Sue Metcalf, who comes to Rugby Memories with her parents, Cyril and Hilda Davies, agrees wholeheartedly. Cyril, 87, has dementia and when he gets chatting with one of the friends he has made at the group, both Sue and her 88-year-old mother can relax and catch up.

“They all like being together – it’s like one big happy family,” says Sue. “When you come into the room you wouldn’t know who has dementia and who hasn’t. I think that’s a great thing.”

People with dementia have to live for the moment, she says, and when Cyril walks into a Rugby Memories meeting his face “lights up”. “He’s really stimulated by the group. I just love seeing them all enjoying themselves and knowing in that moment they’re having a great time.”

Once Cyril leaves the group he has no memory of attending it. To help him, Sue takes photographs of the session, particularly if he meets a former or current player. “I do that [take photographs] because once he gets home he can share the memory with my sons who are Wigan Warriors supporters. I can say, ‘look, here you are with so and so’.”

Claire says money from The National Lottery has played a vital role in helping Rugby Memories keep going. The group has a core group of about 20 members, but more than 100 people have attended one of its events. “It’s [National Lottery funding] been brilliant because it means we can sustain the group,” she says. “We use the money to deliver the programme of events and help fund a mini bus that lets us pick people up from care homes.”

Since the National Lottery’s first draw took place on 19 November, 1994, more than £40 billion has been raised for good causes in the areas of arts, sport, heritage and community.

Claire says Rugby Memories has taught her a great deal about dementia. “I didn’t realise how varied it can be and how it progresses,” she says. “People might not remember what they did yesterday, but if you show them an old [Wigan Warriors] match program they might well remember every single player.”

Back in the stands, Norman is full of praise for Rugby Memories and those who organise it. “It’s reassuring to know there are people like Claire and Sue who do so much to make you feel happy by organising events like this,” he says. “It’s absolutely fantastic.” 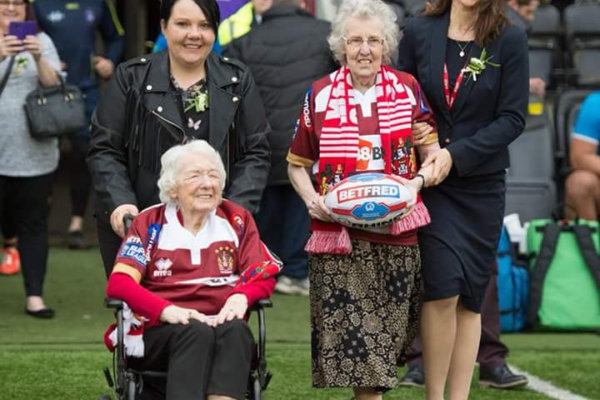 Rugby Memories is a support group run by rugby league club Wigan Warriors as a way to help supporters with dementia and tackle isolation.