Fresh thinking at the Hub

Attending a regular exercise class would be almost impossible for Steven York, a 69-year-old retired teacher who was diagnosed with Alzheimer’s seven years ago.

“If we went to an ordinary gym and he started being too boisterous, it would be really awkward and everyone would be staring,” his wife Maureen explains. “This class is brilliant because everyone is in the same situation.”

Maureen, is referring to the dementia-friendly Healthy and Happy exercise class held at the Great Sankey Neighbourhood Hub in Warrington each week. Tailored to people living with dementia as well as their family members and carers, the one-hour classes use a series of light exercises to improve participants’ co-ordination and balance.

Adam Hazlewood, the Lifestyle Advisor who leads the class with the assistance of Helen Wharton, says a bit of boisterous behaviour is simply part of the fun. “If anything it lightens things up a bit and allows other people to just be themselves,” he says. “We just allow people to do what’s right for them. If they don’t feel comfortable doing something we’ll try an alternative.”

For Rana Das, the Healthy and Happy classes are a rare opportunity for his 90-year-old father Ramesh to get some exercise. Ramesh, a former GP who was diagnosed with Alzheimer’s a year ago, is unsteady on his feet and only feels comfortable exercising if his son is close at hand.

“It’s very good, very helpful to me,” says Ramesh. “I was a very active man. I used to play tennis, badminton and squash and one by one I gave up all those things and I was doing nothing. Coming here gives me a chance to do some exercise.”

The fact that the Healthy and Happy programme is being delivered at the Great Sankey Neighbourhood Hub is no accident. The wellbeing centre, which is designed to offer facilities such as a library, a café, NHS consulting rooms and a pharmacy, as well as more traditional sports facilities, is the first public building in the UK whose architecture, design and facilities have been certified as dementia friendly by the University of Stirling.

The Hub, which replaced a conventional 1970s sports centre, was built with the help of £1.5m from The National Lottery. Since The National Lottery’s first draw took place on 19 November 1994, more than £40 billion has been raised for good causes in the areas of arts, sport, heritage and community.

Matthew Parker, Operations Director for LiveWire Warrington, the organisation that runs the Great Sankey Neighbourhood Hub for Warrington Borough Council, says the university’s dementia-friendly accreditation is usually conferred on specialist care homes. “When we started with this project we knew that the west of Warrington had the fastest ageing population in the town and also the highest prevalence of dementia,” he says. “The university provided with us guidance on every aspect of the design process – from colour schemes to signage and the provision of quiet spaces.”

Colours are an essential part of the Hub’s dementia-friendly design. Its floors are a consistent shade of grey because a significant shift in colour could cause a person living with dementia to become unsteady or disorientated. The centre’s walls are painted vibrant colours according to their function, a scheme that helps people with dementia navigate their way through the building.

Signage is also important. It is clear and consistent – right down to the use of the correct font or upper and lower case – and placed at a height that makes it easy to read.

“As soon as people come in they can orientate themselves to find the facilities they might want to use,” says Matthew.

The Hub also makes extensive use of natural light to create a calming, welcoming environment and offers quiet rooms and quiet spaces to anyone who might find the atmosphere a little overwhelming. ”People living with dementia might find this kind of fast-paced environment intimidating so we’ve created areas where they can sit and be quiet,” explains Matthew.”

The development of dementia-friendly classes and activities is a natural extension of the Hub’s dementia-friendly accreditation. As well as the Healthy and Happy programme, the centre offers dementia-friendly swimming sessions – quieter periods when the pool is less crowded – and quieter times in the gym when the music is turned down. More programmes tailored to people living with dementia will be added in the future, says Matthew.

Councillor Tony Higgins, the Warrington Borough Council cabinet member responsible for Neighbourhood and Communities, says the fact the Great Sankey Neighbourhood Hub has been nominated for a National Lottery Award is a “great testament” to its efforts to be inclusive. He hopes the centre will be a model for other hubs in Warrington and beyond.

Councillor Higgins says the Healthy and Happy programme is a great example of people living with dementia and their family being supported. “Previously, these people would have been excluded,” he says. This [the Healthy and Happy classes] enables them to come out and partake in exercise and that can only be a great thing.”

For Maureen, the Healthy and Happy classes are a valuable opportunity for Steven to exercise safely in a supportive environment. “Sometimes I’m so busy and he can’t really go out on his own,” she says. “He used to do a lot of walking and cycling and he was well into photography. We’ve just come back from holiday and I was struggling to use his camera to take pictures. It’s sad in a way, but we just keep on don’t we.”

Each week, National Lottery players raise £36 million for projects across the UK making vital projects like these possible. 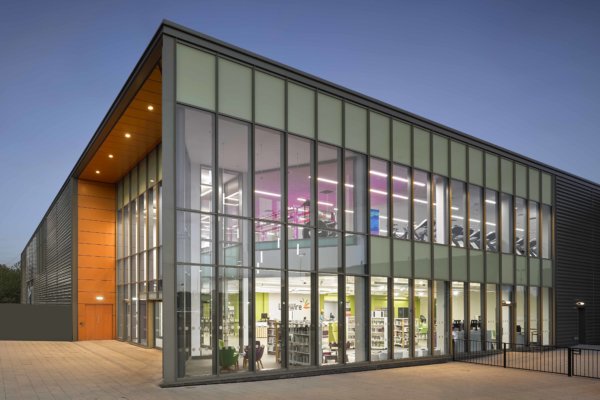