Today, multi-award-winning animation studio Aardman has unveiled an uplifting new film to mark a special £2 million National Lottery fund, which aims to bring communities together across the UK. 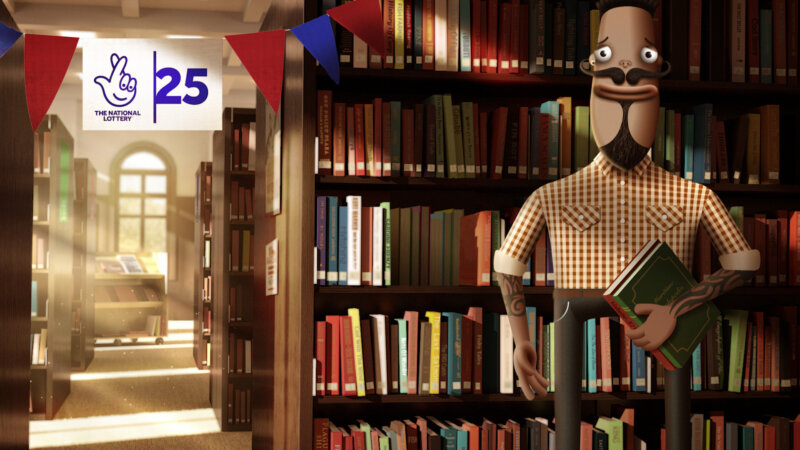 Designed to help communities across the UK join in with The National Lottery’s 25-year birthday celebrations, the £2 million fund from The National Lottery – called #CelebrateNationalLottery25 - is open to anyone with a great idea to make a difference in their local community.

The fund offers anyone the chance to receive £1,000 to make their idea a reality - showing that no individual or idea is too small to make a big difference in their community.

The fund aims to boost community spirit across the UK and appeal to people who might not traditionally apply for National Lottery funding.

The survey of 2,000 UK adults also showed that community spirit remains alive and well in our neighbourhoods, with results showing:

• However, nearly two-thirds of adults (62%) say they are not active in
their local community, while nearly half (44%) would like to be more
active – with young people being the most interested in getting more
involved locally.

• The survey also showed that while two-thirds of adults (62%) would like
improvements to be made in their local area, 1 in 4 say a lack of funding
prevents them from making a difference themselves.

“For 25 years, The National Lottery has been helping communities to thrive in every corner of the UK – from the inner city to remote islands, and everywhere in between. That’s why the fund, #CelebrateNationalLottery25, is to say happy birthday and to inspire anyone and everyone to make their idea for their community a reality.”

Known for their craft and storytelling, the team at Aardman has designed a
range of diverse and inclusive characters representing people and communities reflecting modern UK, with a surprise cameo from stand-up comedian James Acaster who voices one of the characters.

““It’s truly a privilege to support a fund that literally anyone can apply for to bring their community together. This film embraces the diversity in our local communities and highlights the importance of coming together as neighbours, so I hope it inspires lots of people to seek funding for their idea.”

The animation shows what four people would do if they had £1,000 to use intheir community. The script was informed by qualitative research from members of the public across the UK, featuring young people hosting a party to bring neighbours of all generations together, and older people hiring a café to fill with memorabilia to help stimulate memories for those living with dementia.

Director of the film, Aardman’s Peter Peake said: ”#CelebrateNationalLottery25 presented such a fantastic opportunity to create a film with a far reaching and positive message. I’m so proud that we were able to use Aardman’s style to depict a real cross section of characters from across the UK and show how, despite all our quirkiness and little idiosyncrasies essentially, we’re all united through common goals.

“It’s been one of my favourite projects to have been involved in and I hope it’ll inspire people to make a positive change that’s ultimately right at their fingertips.”

Thanks to National Lottery players, more than £40 billion has been raised for good causes in the areas of arts, sport, heritage and community over the last 25 years.
The fund marks the culmination of a major campaign by The National Lotterycelebrating its impact over the past 25 years and thanking players for contributing £30 million to good causes every week.

#CelebrateNationalLottery25 opens to applications from Saturday 23 November at 8am until Friday 6 December. Whether it’s a wheelchair lift for a dial-a-ride minivan, a set of events at your local library or even a llama visit to a primary school, The National Lottery wants to hear your great ideas.

Everyone who submits an application will be entered into the lottery draw, which will take place after the deadline closes at 2pm on Friday 6 December 2019.
Applications will go through a checking process to ensure that the idea being funded is eligible and that the money will be used as intended.