By day, Gordon Wilson is a welder at a company on Scotland’s west coast that makes the giant steel towers that support wind turbines. But two, sometimes three times a week, he turns his back on real life and loses himself in an action adventure movie, a science fiction flick or a comedy.

“You get reality seven days a week,” says the 54-year-old who tries to see every film at the Campbeltown Picture House, a picturesque two-screen cinema in the isolated town near the tip of the Kintyre peninsula in Argyll and Bute. “For a couple of hours it’s great to escape and be entertained.”

Gordon has been a regular at the little cinema since he was a child. “My father used to bring me to the Saturday matinee and there would be a queue down the road,” he recalls. “There was a wee kiosk with a glass screen where you bought a ticket. You had to come outside to get your crisps and sweeties and they had a children’s bingo game at the sweet stall.”

Nowadays, the Picture House’s patrons sip wine and gin and tonics in the stalls; a smart café serves nachos, cakes and espressos. But the basic experience of sitting in the dark with a bunch of strangers and being moved, scared or amused is unchanged.

The cinema’s manager, Ellen Mainwood, says Gordon is part of a “really core group of regulars” who come to see movies because they love them, but also to ensure the Picture House is supported. Without it, locals would have to watch films at home or make the long trip to Glasgow – a four-hour bus ride – to get their fill of celluloid escapism.

“There’s no real competition,” laughs Ellen. “Our competitors are the weather, the beaches and home entertainment.”

The Campbeltown Picture House, one of Scotland’s earliest purpose-built cinemas, opened in 1913. Back then, the town was home to more than 40 whiskey distilleries and there was plenty of money to build an elegant Art Nouveau structure created by the celebrated cinema designer Albert V Gardner.

“It was limping along,” says Jane Mayo, the chair of Campbeltown Community Business Ltd, the owner of the cinema. “We had to raise funds to replace a light bulb and there’s only so much that volunteers can do.”

A year after celebrating its centenary in 2013, the Picture House closed while efforts to secure its refurbishment continued.

The breakthrough came in 2016 with a £3.5m grant from The National Lottery Heritage Fund. Since the first draw took place on 19 November 1994, more than £40 billion has been raised for good causes in the areas of arts, sport, heritage and community.

Using information about the cinema’s original design found in a collection of papers stored in a tin box – a treasure trove that has been donated to The National Library of Scotland – the renovated, extended Picture House is an artful blend of old and new. The café, education rooms and second screen are additions, but the main screening room is a faithful reproduction of the atmospheric style of décor popular in the 1930s. The ceiling is decorated with clouds and on either side of the screen are two small ‘houses’. It’s a deeply whimsical aesthetic that aims to recreate the sensation of sitting outside whilst being entertained.

Watching a movie at the Campbeltown Picture House with Sam, her 12-year-old son, is a weekly treat for Helen Pickering.

“He’s my cinema buddy,” says Helen who moved to the town from Yorkshire more than a decade ago. “We always sit on the big seats at the back and eat popcorn. We love it – it’s so cosy.”

Helen says the restored cinema has an important role in an isolated town that is more than three hours drive from Glasgow. “It’s a community-run place for the community,” she says. “We’re always bumping into people here and all staff know you too.”

She was worried that the recent restoration would rob the cinema of some of its character, but says she’s thrilled by the result. “They’ve enhanced everything – it’s a fantastic job.”

What would she (and Sam) do without the Picture House? “I’d be heartbroken,” she says. “I love movies. It’s just that sense of losing yourself for an hour and a half. Sometimes you wish it had gone on longer.”

Helen has a message for players of The National Lottery who helped fund the restoration of the cinema. “Thank you,” she says. “The cinema needed preserving and it needed some love. So thank you very much.” 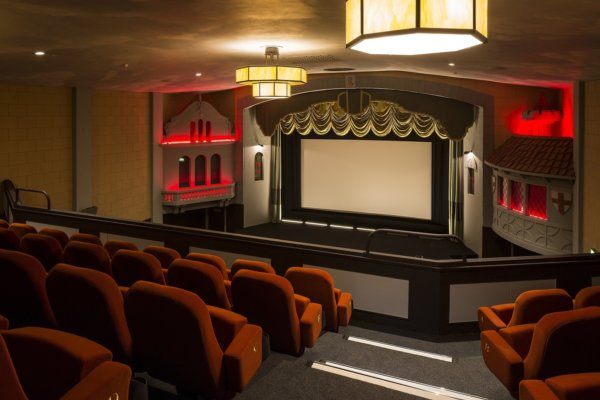